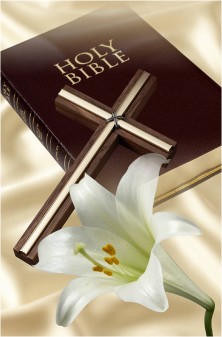 You may sometimes hear a religious figure say that voluntary euthanasia contravenes the sanctity of life. However, as Rev. Trevor Bensch, co-founder of Christians supporting choice for Voluntary Euthanasia, points out, the term ‘sanctity of life’ appears nowhere in the bible. Interpreting selected passages of the bible to mean so is a personal matter for the individual. It’s a human construction. One could equally interpret other passages of the bible to authorise or justify selling daughters into slavery or putting whole peoples to the sword. Voluntary euthanasia does not require anyone to choose it and anyone is free to avoid assisted dying if it offends their personal beliefs and values.

Excerpt of a paper by the Rev. Dr. Andrew Dutney published in the Monash Bioethics Review Vol. 16 No. 2 dated April 1997.

Even among the “experts” and “authorities” there is a diversity of opinion. Catholicism has an official position of unqualified opposition to any form of euthanasia. According to the catechism, “Intentional euthanasia, whatever its form or motives, is murder. It is gravely contrary to the dignity of the human person and the respect due to the living God, his (sic) Creator”. But there are Catholic voices expressing disagreement with that position.

Hans Küng, a well-known Catholic theologian, has taken a similar position. In his view, “God, who has given men and women freedom and responsibility for their lives, has also left to dying people the responsibility for making a conscientious decision about the manner and time of their deaths. This is a responsibity which neither the state, nor the church, neither a theologian, nor a doctor can take away”. For Küng, “precisely because I am convinced that death is not the end of everything, I am not so concerned about an endless prolongation of my life—certainly not under conditions that are no longer compatible with human dignity”. 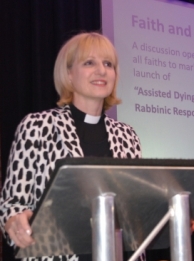 Canon Rosie Harper, a leading woman priest in the Church of England has spoken out in favour changing the law to allow assisted dying.*

Canon Harper, vicar of Great Missenden and chaplain to the Bishop of Buckingham, said she supports Lord Falconer’s Assisted Dying Bill which receives[d] its second reading in the House of Lords on July 18. [2014]

Her position directly contradicts that of the Church of England, which has argued consistently for no change in the law.

Canon Harper was one of three faith leaders backing the Bill during a debate on the issue hosted by Interfaith Leaders for Dignity in Dying in Westminster, London, July 17, 2014.

She described the assisted death of her uncle with Dignitas in Switzerland. “My uncle had a beautiful death, with his family around him – good music, good wine, and a pain-free end. The days that would have followed as he struggled through the end stage of a brain tumour would have been terrible. He had no choice about dying. He did have choice about the manner of his death. That’s all this bill is offering.”

She said she could not believe in a God who would require “the most extreme suffering” simply in order to shore up “her” sovereignty.

“Nor do I believe that holding on to life at all costs is the uncontested goal of humanity. The crucifixion itself demonstrates that there are higher goals than the preservation of one’s life. John 15.3: There is no greater love than to lay down one’s life for one’s friends.”

She argued that a God who offered “freedom of will” would not insist on “extreme suffering” at the end of life when there was a different, better way. Addressing the arguments against, she continued: “First there is the contention that pain can always be controlled. We know that simply is not the case. Anyway – in what way is there value in a person being technically still alive if they are sedated to the point of oblivion?

“Secondly, what this bill proposes is infinitely more honourable than what routinely happens now when a dying person is gradually and cruelly starved to death.

She also said in countries where it is already legal, such as Switzerland, “grannies are not being bumped off, and both old people’s homes and hospice care is of a far better standard than anything we offer over here.”

The bill would be for a small number of people but offer comfort for a larger number of people. “It is loving, kind and honourable, all good Christian and indeed human values.”

Speaking also to Christian Today, she said: “I support Falconer’s bill really out of the depths of my faith. I think it comes down to what sort of God you believe in. I believe in a God who is compassionate and who essentially offers us free will.”

She continued: “The biggest choice we have to make always is to do with the fate of our eternal soul.” If God trusted people with that choice during their lives, surely he would also trust them with that choice at the most important time of all, the end of their lives, she said, arguing that the concept of suicide as a sin is a relatively recent construct. “There are nine suicides in the Old Testament and none of them are condemned. You could actually make quite a cogent argument to say that there is a suicidal element to the crucifixion. Jesus knew perfectly well what was to happen, and he did not count his life just simply going on more valuable than the higher task he had to do. There are deeper moral issues about your life than just making it go on and on for ever as long as it can go.”

* Included with permission from http://www.christiantoday.com/article/senior.cofe.priest.why.i.am.pro.assisted.dying/38052.htm

Our plain-English booklet refutes false religious argument—acquaint yourself with the facts in less than 10 minutes. Download PDF 2.2 Mb

Death is better than a miserable life, and eternal rest than chronic sickness.

Article courtesy of Interfaith Leaders for Dignity in Dying in the UK- http://www.dyingindignity.org.uk/.

"Death is not the end of everything, so I am not so concerned about an endless prolongation of my life—certainly not under conditions that are no longer compatible with human dignity."

"Many Christians feel God is not honoured by a person (made in the 'image' of God) abdicating her autonomy and freedom of will and passively submitting to 'fate'."

"There is nothing faithful about relinquishing responsibility."

"Few would now accept the view that one range of actions belongs wholly to the sphere of human free will and another wholly to God. God does not lay exclusive claims to decisions about ending one's life."