A new poll, undertaken in February 2020, clearly demonstrates Queenslanders, of all faiths, are heavily in favour of Voluntary Assisted Dying laws.  It was conducted for the Clem Jones Group by YouGov.

The QUESTION asked: Voluntary assisted dying laws allow a person in the late stages of advanced disease to take medication prescribed by a doctor that will bring about their death at a time they choose. Currently the laws in Queensland do not permit this. Do you support or oppose the law being changed in Queensland to allow voluntary assisted dying?

One of the results:

A more complete report can be found here: https://www.theguardian.com/australia-news/2020/aug/08/most-queensland-churchgoers-say-they-support-voluntary-assisted-dying 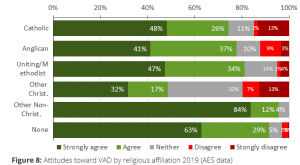 Neil Francis points out: “Amongst Australians who still count themselves as religiously affiliated in 2019, a majority of all religions except minor Christian denominations clearly favour VAD (Figure 8), including three quarters (74%) of Catholics, four in five Anglicans (78%) and Uniting/Methodists (81%), and almost all non-Christian religious (96%) and non-religious (92%).”

Neil continues: “Even amongst the minor Christian denominations with nearly half (49%) in support, just one in five (20%) were opposed to VAD, the rest being neutral.”

“Strong support amongst Catholics increased massively from 36% in 2016 to 48% (close to half in strong support) in 2019, highlighting the irony of Catholic clergy continuing to actively oppose VAD law reform.”

“Given the tiny minorities opposed across the religious spectrum, those clerics who continue to vocally oppose the legalisation of VAD — including some employing serious misinformation — in no way are speaking for the majority of their flocks.”

“But by far the most dramatic change over the 12 years is that No Religion has soared from 26% to 41% of the population, an increase of 61%. The largest increase was between 2016 and 2019, most likely a result of Australians’ dismay at the 2017 reports of the royal commission into institutional responses to the sexual abuse of children. It found that most offenses occurred in religious institutions, more than half of them in the Catholic church alone.”

Some religious people claim that interest in voluntary euthanasia for the terminally ill comes only from a minority of secularists. For example, His Grace Adrian Doyle, Catholic Archbishop of Hobart, wrote in a letter dated 15th July 2009 “they [members of Parliament] should be reminded that they are not authorised to impose upon our society the secular agenda of a few while ignoring the moral and religious values of so many Australians.

Therefore, the opinions Their Graces express are at odds with the facts, and do not even express a majority opinion of their own flocks. A very small minority of Australians oppose.

The overwhelming majority of people of faith support choice
for voluntary euthanasia.

Christian support is not new

Excerpt of a paper by the Rev. Dr. Andrew Dutney published in the Monash Bioethics Review Vol. 16 No. 2 dated April 1997.

As it happens, Christians have always been active in the modern voluntary euthanasia lobby. Among the founders of the American Euthanasia Society, in 1945, were prominent Christians such as the New York divines Henry Sloan Coffin, the President of Union Seminary, and Harry Emerson Fosdick, the minister of Baptist Riverside Church. Contemporary organisations such as the South Australian Voluntary Euthanasia Society call attention to clerical supporters of their cause—such as Michael Hare Duke, the Episcopal Church in Scotland’s Bishop of St. Andrews, or Lord Soper, a former president of the English Methodist Church, or Jacques Pohier, the eminent though controversial Catholic theologian—by printing and distributing their essays and addresses in support of voluntary euthanasia.

When Australian Christians have been asked to indicate anonymously their attitude to some form of euthanasia, there have been no shortage of supporters. According to the 2002 Morgan Poll in South Australia, 81% respondents nominating as Anglicans, 66% of Presbyterians, 69% of Catholics and 74% of those identifying with the Uniting Church supported voluntary euthanasia. The National Church Life Survey of church attenders (1991) found lower, but still high levels of support for some form of euthanasia—51% of Anglicans, 37% of Presbyterians and 59% of Uniting Church attenders. Among other factors, the difference between the levels of support in these surveys is related to the fact that the Morgan Poll included nominal Christians whereas the NCLS focussed on church attenders only.

Caution is needed in comparing the findings of unrelated surveys, but two comments seem worth making. From one perspective it could be said that the difference in results of the two surveys shows that the more contact people have had with their church the less likely they are to support voluntary euthanasia. That is, something about the church and its teachings runs against the current in society which supports the cause of voluntary euthanasia. But from another perspective it could be said that the NCLS findings show that involvement in the church and adherence to its teachings is quite compatible with support for voluntary euthanasia. The numbers are smaller among attenders than among nominal Christians, but the numbers are still strikingly large, showing majority support among active Anglicans and Uniting Church people. Of course we don’t do ethics on a show of hands, “Thus said the Lord: the ayes have it”! But especially in Protestant churches, we do take seriously the considered opinions of our sisters and brothers as we struggle to discern God’s will together. The body of lay opinion in support of some form of euthanasia has to be engaged, respected, and taken seriously in that process of discernment. It ought not to be ignored, talked round, or bullied into silence by the churches”, “experts” or “authorities”. 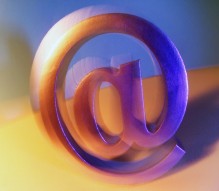 Amongst Christian groups surveyed [1], only Jehovah's Witness data was indicative of majority opposition to volutnary euthanasia; Pentecostal responses were mixed. All other Christian denominations including Catholic, Anglican, Uniting, Presbyterian, Baptist, Lutheran and Orthodox indicated a majority of support for voluntary euthanasia.

Here is the church.
Here is the steeple.
Open the minds.
Empower the people.