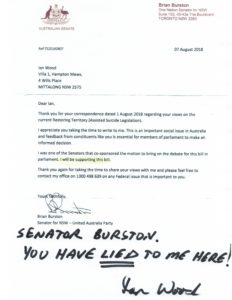 As I advised you in my earlier letter, I have my diagnosis of a type of dementia, which is killing off my brain cells until its wrathful journey ends all of my brain functioning. It is taking my world away. I will not allow my family to view me this way. END_OF_DOCUMENT_TOKEN_TO_BE_REPLACED

My comment that Life Site News did not want you to see!

I  refer to the article in Life Site News by Brad Mattes: https://www.lifesitenews.com/opinion/assisted-suicide-no-longer-just-for-the-terminally-ill

Here is my comment that they posted briefly, then took down.

I respectfully take issue with some of the points he [Brad Mattes] makes and ask for clarification, and make a comment on other points.

The closest I can find is that they both permit turning off life support systems, which is also permitted in   Australia.

– Next he states: Re Netherlands In 2013 — just 11 years later — it’s estimated they euthanized 650 babies. The use of the word ‘euthanized’ here is simply not correct! Research articles by Neil Francis, Dying For Choice, here and Prof, Colleen Cartwright confirm this.

On 12th June 2013 the KNMG [Royal Dutch Medical Association] issued a media release announcing that it  had published a position paper on ‘Medical end-of-life decisions in neonates with very serious defects’.  The media  release stated that of around 175,000 babies born each year in the Netherlands, “around 650 infants will die,  usually as a result of very severe congenital defects and in spite of the best possible intensive care treatment.”  END_OF_DOCUMENT_TOKEN_TO_BE_REPLACED

We need the CHOICE in NSW! 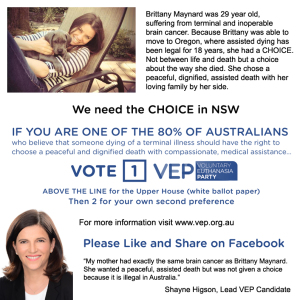 If you are a NSW voter, will your vote be “Pro Choice”?

Yes, Christians DO support voluntary euthanasia. My article in On Line Opinion.

Thursday March 5, 2015 I had an article, “Yes, Christians do support voluntary euthanasia” appearing in OLO (On Line Opinion)
http://www.onlineopinion.com.au/view.asp?article=17148

South Australian Voluntary Euthanasia Society (SAVES) also have the same article, but with more photos, in their Newsletter.

Please read and pass on to your friends

The DWD NSW “Pollies Register” for State Election March 28. Who is PRO-CHOICE?

I attended the Dying with Dignity NSW Forum at Parliament House in Sydney, Wednesday 25th February.

A feature of the afternoon was the launch of the Pollies Register, that lists the support or otherwise of NSW MP’s and candidates on the issue of VOLUNTARY ASSISTED DYING for the Election on Saturday 28 March.

The LOWER HOUSE list may be found here, but please check for updates as they come in –
http://dwdnsw.org.au/documents/2015/pollies%20regsiter.pdf

Pro-Choice candidates for the Upper House can be found here –
http://dwdnsw.org.au/vote-for-pro-choice-candidates-in-the-nsw-election/

Assisted suicide ban is struck down by Canadian Supreme Court

THIS IS VERY RELEVANT TO ALL AUSTRALIANS!

Canada’s Supreme Court has unanimously struck down a ban on doctor-assisted suicides for mentally competent adults suffering an incurable disease. The Canadian Parliament has been given 12 months to enact legislation to comply with the Supreme Court guidelines.

“The prohibition on physician-assisted dying infringes the right to life, liberty and security of the person in a manner that is not in accordance with the principles of fundamental justice,” the court wrote, adding END_OF_DOCUMENT_TOKEN_TO_BE_REPLACED