What a disgraceful, vitriolic editorial is “Drop dead disgrace” (Catholic Weekly, 25 May) From the title to the picture of a young child holding an anti-Voluntary Assisted Dying (VAD) placard at the end of the article, it displays a total lack of empathy.

The unnamed author castigates NSW Premier Dominic Perrottet and Opposition Leader Chris Minns, both committed Catholics, for not doing more to scupper the VAD bill, describing their failure as “one of the most humiliating examples of meek acceptance of evil ever seen”. An incredible claim that, from any rational viewpoint, is blatantly untrue.

I suppose we should be thankful that the editorial did not openly advocate Perrottet and Minns be excommunicated.

The editorial portrays the NSW VAD law as imposing state-sanctioned killing. We will put aside for a moment the evil of Catholic sanctioned “killing” during the Crusades, in religious wars, the Inquisition, the burning of witches, the ‘troubles’ in Ireland, and the fact of the Catholic Church coverup of paedophile priests that led in turn to the tragic suicides of so many of their innocent victims.

Any person who disagrees with the Voluntary Assisted Dying choice is perfectly free not to initiate the rigorous assessment process needed to access the VAD option, and is perfectly free to choose to accept all suffering that comes their way as they are dying.

Many people were heartened and admired the honesty of Dr Robert Olvera, a Harvard-educated physician in California, and what he stated prior to the passing of the End of Life Choice Bill in California,

“As a Catholic and a physician, I feel compelled to dispel the myths about these bills perpetrated by the Roman Catholic Church, some disability groups, and the American Medical Association (AMA).

My 25-old daughter Emily Rose desperately pleaded for this option during the final few agonizing months of her life last spring when she suffered in horrific pain from terminal leukemia, despite getting great home hospice and palliative care.

As a Catholic, I pray to God for the passage of the bills authorizing medical aid in dying. These laws would ensure that dying Americans have the option to pass peacefully in their sleep, suffer less, and spare themselves the pain of a lengthy and prolonged death that my daughter had to endure.”

Personally, as a Christian, I found it informative that Dr Olvera was praying to God that the VAD Bill be passed, and those opposing VAD were praying that it not pass.  Olvera’s prayer was answered, and the End of Life Choice Bill passed in 2015. May we draw a conclusion from this?

Equally informative is the fact that the California Bill was signed by Gov. Brown, a committed Catholic, who had formerly trained as a Jesuit, and as Governor he actually had the right to veto this Bill.  Instead, in a very rational and compassionate letter, he concluded –

“In the end, I was left to reflect on what I would want in the face of my own death.  I do not know what I would do if I were dying in prolonged and excruciating pain. I am certain, however, that it would be a comfort to be able to consider the options afforded by this bill. And I wouldn’t deny that right to others.”

Religion, and the Christian Bible have long been used to support opposition to change, just as it was used to resist the abolition of slavery, university education and voting rights for women, use of pain relief for women in childbirth, and in attempting to prove that Earth was the centre of the universe.  History has shown this use of the Bible to be inappropriate.

A significant majority of Christians, including Catholics, believe the time has come to put love and compassion for a fellow human ahead of theological differences of opinion. This is why VAD legislation has been passed in every Australian state, and the VAD choice accepted by Australians generally. We would argue that Perrottet and Minns both acted responsibly – speaking against the Bill as they were entitled to do – but not abusing their position and power to frustrate the democratic process.

To reiterate – the key words are ‘voluntary’ and ‘choice’.

Read more: Rev Michael Dowling and his address to South Australia Parliament in support of VAD as an end of life choice.  https://christiansforvad.org.au/rev-michael-dowling-presentation-to-south-australian-mps/#more-735

Read more: Rev Kilgour of NZ – Sermon in support of an assisted death after his nephew in Canada used MAiD (Medical Assistance in Dying). https://christiansforvad.org.au/rev-craig-kilgour-new-zealand-sermon-my-nephew-had-an-assisted-death-in-canada-it-was-compassionate-it-was-humane-it-was-right-and-good/#more-560

Read more: Archbishop Emeritus Desmond Tutu of Capetown and his support for VAD as an end of life choice END_OF_DOCUMENT_TOKEN_TO_BE_REPLACED 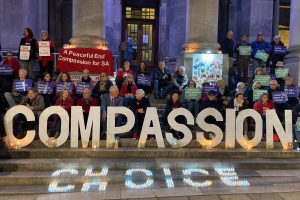 By working together we have made this happen!

Our grateful thanks go to Kyam Maher MLC for initiating this Bill in memory of his Mother, Viv.  What an outstanding memorial!!  Thanks also go to Dr Susan Close for her contribution in the House of Assembly.  Then more thanks to all involved in the campaign including the VADSA team led by Frances Coombe, together with Anne Bunning, Susie Byrne, and Julia Anaf.  Plus Dr Roger Hunt, Jane Qualmann, Angie Miller, Kym Watson, Rev Michael Dowling and Rev Dr Craig de Vos have all been invaluable SA advocates for compassionate end-of- life choice. Apologies to those I have omitted!

At this time we also remember with gratitude those campaigners who have died waiting for the law to be passed.  These include our group Co-founder, Rev Trevor Bensch, our former Patron Kym Bonython, Bob Such MP and folk such as Mary Gallnor.

Others outside of SA who have mentored and assisted me to reach this stage include Tanya Battel, Penny Hackett, Shayne Higson, Geoffrey Williams, Adrian Price, Rev Ken Devereux, Mike Gaffney and Norma Jamieson, also Andrew Denton and Kiki Paul of Go Gentle Australia, ……………

Now we shift our focus to Queensland, New South Wales and the 2 END_OF_DOCUMENT_TOKEN_TO_BE_REPLACED

If you live in the Mount Gambier area of South Australia,  please come with a friend and support this event.  If you have friends and family living there, encourage them to come and show their support for the choice of Voluntary Assisted Dying. 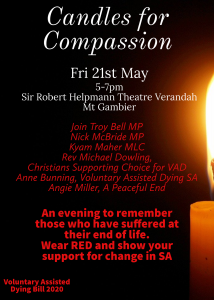 The encouraging news from South Australia is that on Wednesday 5th May 2021 the Legislative Council voted 14 yes and 7 No to pass the Kyam Maher MLC, Voluntary Assisted Dying Bill.  It now goes to the Lower House for consideration and Premier Marshall has indicated debate could start there as early as Wednesday 12th May.

Candles for Compassion will go ahead, either to continue to show MPs that legislation for compassionate end-of-life choice is needed, or to say thank you to the MPs who voted to pass the VAD Bill and as a END_OF_DOCUMENT_TOKEN_TO_BE_REPLACED

Please note that the views expressed by Michael Dowling do not reflect the views of the Uniting Church in South Australia, which currently has no policy on Voluntary Assisted Dying.

Here is Rev Dowling’s presentation, in full, published with permission…….

Thank you for the opportunity to speak to you as the local representative for Christians Supporting Choice for Voluntary Assisted Dying. It’s a privilege to be involved in this important discussion.

I suspect that some of you here today identify with a particular religious tradition, and that some do not. When it comes to the matter at hand – VAD legislation – I wish to address both groups; and I wish to do so in a way that moves beyond religious stereotypes, stereotypes based upon very vocal adherents of a particular viewpoint; stereotypes that propagate the myth of a monolithic “Christian view” on social issues; that, for example, all Christians oppose gay marriage; that all Christians wish to criminalise abortion; and that all Christians oppose voluntary assisted dying (VAD). Such is not the case. Within the Christian faith there is a wide variety of views on these subjects.

In particular reference to VAD…

The group I represent are:

Christians who believe that, as a demonstration of love and compassion, those with a terminal or hopeless illness should have the option of a pain-free, peaceful and dignified death with legal voluntary assisted dying.

According to the 2019 “Vote Compass,” some 3 out of 4 Christians in Australia are in favour of legislation for the choice of VAD.

“Surely the Christian faith and the Bible have a blanket prohibition against voluntary assisted dying?!”

If you thought this, you would be wrong.

As previously mentioned, “Christianity” is far from monolithic when it comes to social views, including views on VAD.

As for the Bible, it has nothing, nothing whatsoever, to say on the specific subject of voluntary assisted dying.

Christian opponents of VAD, if they use the Bible to support their argument, are forced to rely on generalities and then seek to extrapolate from these generalities to the specific case of VAD. They might quote, for example, the biblical commandment, “Thou shall not murder” and then curiously equate murder with VAD. Christian opponents to VAD might also claim the inviolable “sanctity of life,” stating that human life is so sacred that it can never be deliberately ended, even if the person in unrelievable suffering has requested its end.

These arguments can be rebutted on two grounds.

If the Christian opponents of VAD assert that “sanctity of life” and “prohibition against killing” are timeless and inviolable Christian injunctions, then they are either wilfully ignorant or just plain disingenuous.

If behaviour is any guide, then over the centuries, Christians have been, not infrequently, quite enthusiastic about killing, and quite indifferent to the sanctity of life. Crusades, religious wars, persecutions, pogroms, torture, and burning at the stake have all been conducted by those who could point to holy Scripture for its justification. In more recent times, many conservative Christians in countries such as the United States, are enthusiastic supporters of the death penalty.

The reason that some Christians can quote the Bible, when it suits them, as justification for killing, is that the Bible itself is quite ambivalent about killing, and quite ambivalent about the supposed sanctity of life. Yes, on the one hand, the Bible contains many admonitions to us to love one another. On the other hand, the Old Testament biblical authors, not infrequently, portray a tribalistic God who orders the wholesale genocide of entire groups of people. For some troubling bed-time reading, try Book of Numbers chapter 31, but only if you have a strong stomach.

The Christian Bible says many things that have inspired and motivated the lives of the most sublime and saintly people.

The Christian Bible has also been used to justify the most appalling and callous behaviour.

When we Christians feel compelled to offer ethical advice to the wider society, in this case ethical advice as to the sanctity of life, we would do well to remember Jesus’ adage, an adage as relevant today as it was 2,000 years ago: we should first cast the log out of our own eye before seeking to remove the speck of sawdust from the eye of another.

But when it comes to the specific case of VAD, the Christian Bible says…precisely nothing.

And so, just like other members of our pluralistic society, Christians need to examine the proposed VAD legislation on its merits and with a willingness to engage END_OF_DOCUMENT_TOKEN_TO_BE_REPLACED