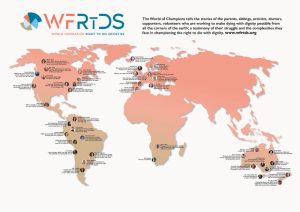 There are many forces that differentiate us in the world: politics, religion, beliefs to name only a few. One thing that unites us is the desire to die with dignity. Asunción Alvarez, president of the World Federation of Right to Die Societies said, “Around the globe, many people fight to make a death with dignity possible for themselves and those they love. It is these people that we would like to put in the spotlight for World Right to Die Day 2022; the Champions, who through their support, activism, fighting, writing, willpower, vision and strength, are advocating to make right to die legislation possible all over the world.”

Rob Jonquière, Executive Director said, “The World of Champions tells the stories of the parents, siblings, activists, doctors, supporters and volunteers who are working to make dying with dignity possible from all the corners of the earth. It is a testimony of their struggle and the complexities they face in championing the right to die with dignity. In some areas, the map is empty, and while there are certainly Champions in each of these countries, their efforts are shrouded in silence without right to die societies to support their cause and tell their story. We hope that they will join us in time.”

It is truly humbling to find my name included in this 2022 list of Champions supporting Voluntary Assisted Dying legislation world wide.   To be next to names from Australia such as Dr Rodney Syme, Shayne Higson, Mike Gaffney MP and my friend Tanya Battel……….

My sincere thanks go to all those who have mentored and encouraged me to lobby for compassionate end of life choice.

By clicking on the above link for a map of world champions, a short summary of each ‘champion’ can be found.