On September 22, 2021, we recall the first legal assisted death in Australia, in fact in the world, that of Bob Dent in the Northern Territory on September 22, 1996, 25 years ago.  Bob had suffered from prostate cancer.  We thank Marshall Perron, who, as the Chief Minister of the NT, initiated this legislation.  Sadly, this legislation was overturned by Federal Parliament the following year by the Howard Government by what has been known as the Andrews Bill.  We acknowledge Bob’s wife, Judy, who, as President of the NTVES (NT Voluntary Euthanasia Society), has been lobbying for 25 years to have the Right of the Territory restored to the NT Parliament to enact a VAD Bill.

Tragically, on the same date, September 22, but in 2017, Elizabeth Holmes, who had been in agony for some time from stage 4 breast cancer and other serious health problems, decided the only way to relieve her suffering was to take her own life in Tamworth, New South Wales.  As Elizabeth (Liz) noted just prior to her death, this desperate action could have been avoided if NSW had had a Voluntary Assisted Dying Law.  Such a law would have given Liz a compassionate extra choice in the manner of her dying.

New South Wales is now the only state remaining without a VAD law,  It is time!  COVID-19  has made many of us contemplate our dying and should not be used as a reason for delaying legislation.

This following speech by Sandra Nelson, MLA for Katherine, NT,   talks of the circumstances prior to the death of Elizabeth Holmes.  It is surely yet another reason why a Voluntary Assisted Dying  law is needed  in New South Wales.           The speech has now been shared with all NSW Members of Parliament by Elizabeth Holmes’ daughter.

Posted here, including photos, with permission.

ADJOURNMENT – EUTHANASIA
23 November 2017
Madam Speaker, I rise tonight to commend Premier of Victoria – Daniel Andrews and his government on the historic passing of voluntary euthanasia laws which were passed in Victoria’s Upper House on Wednesday 22nd November.
Madam Speaker , There are few topics as popular, and yet divisive, as euthanasia. Both sides raise compelling arguments, and those arguments are numerous.

End of life care for the terminally ill or those with ir-remediable illnesses is dictated by law, regardless of what is in the best interests of the patient. The current prohibition on assisted suicide is at odds with our otherwise patient-centred health system, it’s almost contradictory. This is the one area of medical care in which the patient’s views cannot be considered and taken into account in determining a course of action.

The Northern Territory likes to think of itself as frontier country – it was certainly at the forefront of the international debate over euthanasia. On 25 May 1995 it became the first jurisdiction in the world to pass laws allowing a doctor to end the life of a terminally ill patient at the patient’s request. In doing so, the law permitted both physician-assisted suicide, and active voluntary euthanasia in some circumstances.

And under the Rights of the Terminally Ill Act 1995 (NT) strict conditions applied: it is neither an unqualified ‘licence to kill’ nor an unqualified affirmation of a competent adult patient’s right to assistance in dying.

Madam Speaker, a couple of weeks ago I was visited in my electorate office by Sharon Cramp and her husband Spud.
Sharon and Spud shared with me the story about Sharon’s beautiful mother, Elizabeth Ann Holmes. Liz broke her back when she was 53, she battled breast cancer for 12 years, and had 2 hip replacements (one that dislocated itself early this year). She had a terrific career; she worked in a bank, she raised money in the Miss Australia Quest, 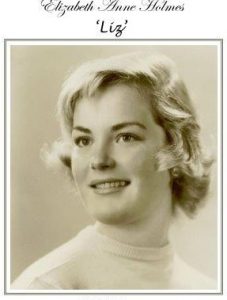 worked as a model, worked in retail, worked as a divisional secretary for a prominent insurance company, and also worked as a volunteer Life Line counsellor for 18 years.

And most importantly, Liz was a devoted and dedicated wife and mother.
Liz kept a very detailed diary; which Sharon has shared with me. Liz’s diary explains in detail the decisions she was faced with before she took her own life this September. Liz was 77 years old when she died.

Sharon has shared also with me a letter that her mother wrote to her. And I will read that letter now.
“To everyone I love, especially Wayne, Sharon and Wendy. I was so looking forward to my life after my two hip surgeries. I have not been able to walk or drive for years……….for the first time after the second operation and I knew my life was ruined. My dream of training into Melbourne to visit my son and grandkids and also to Adelaide to catch the Ghan to see Shaz and Spud out of Darwin and my first trip to Wen and Daves home and my granddogs. Now I cannot even walk Katie!
(Katie was her dog)

‘I thought okay, if I cannot walk, I will swim and I cannot do that as well. My grade four breast cancer has progressed and has broken through the skin and will infect people and become infected myself. I have had 24 years of pain. I am not going to burden my children and friends and have palliative care. What a farce that is! Because there is no option in New South Wales, I choose euthanasia. At least I could still drive but I am not capable of doing that. Never had an accident in 60 years. I have lost my confidence in driving. I have no independence. My licence has been cancelled. I have to pay to keep my garden, house and dog plus maintenance. I watch tv, I read, I do crosswords. I have become a hermit, with a dog called Katie, my saviour. I have nothing to look forward to but pain and indignity. We all should be able to choose when we die, so with great courage and no cowardice I go to God. An act of love. Please cremate Katie so she can be with me. Love, mum.” 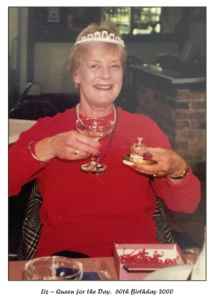 Our Chief Minister has asked the federal government for the Northern Territory to have back that ability to make the decision for ourselves in this Chamber, he stated “ensuring that we all have control over our lives, that we are masters of our own destiny. That is an essential guiding value of this government.”

I put on record today that I support a person’s right to die with dignity, when and how they choose to do so. On behalf of Sharon and Spud, the rest of their family and their friends, and in memory of their mother Liz Holmes and in loving memory of my father – Joao Carrascalao, who also had to make a difficult decision, I commit today to lobby to introduce voluntary euthanasia laws to the Northern Territory.

I end my adjournment with a poem that is in Liz Holmes’ dedication book given out at her funeral.
“A celebration of life.
Do not grieve for me. If my parting has left a void, then fill it with remembered joy. A friendship shared, a laugh, a kiss. Ah yes those things I too will miss.
Be not burdened with times of sorrow. I wish you the sunshine of tomorrow. My life has been full. I savoured much. Good friends, good times, a loved one’s touch.
Perhaps my time seemed too brief. Do not lengthen it now in undue grief. Lift up your heart and share with me. Be happy. I am set free.”
In memory of Liz Holmes.

I have the memorial book and a copy of Liz Holmes’ diary and letter she wrote that I read tonight. I would like to table these in Parliament.
I have also shared copies of these with all Members to take the time to read through. It is an incredibly detailed diary and I encourage you to read it, so all of you have the opportunity to gain insight into what people go through when they make this decision.
Thank you Madam Speaker.

Conclusion of the speech by Sandra Nelson MLA for Katherine.