Ian Wood:  During my 10 years as spokesperson for our group I have read many horror stories of extreme futile suffering inflicted by doctors in a most callous way.  However this story of Genevieve McCool dying in a Canadian Catholic hospital must rank among the most horrendous!  It was just prior to the Canadian MAID (Medical Assistance in Dying) legislation.  Burning at the stake, as in the days of Giordano Bruno, burned to death for ‘heresy’ would have been far more humane!

The following is published with the authorisation of Theresa McCool.  Warning: A photo here is graphic and disturbing. Theresa is sharing this story in the hope that it will assist in the passing of VAD legislation in the other states and territories of Australia, and not just be limited to Victoria.

My name is Theresa McCool.  I live in Canada where MAID (Medical Assistance In Dying) is now legalised. It was not legalised when my Mom died in 2015.

I believe Voluntary Assisted Dying, as it is known in Australia, should be legalised in every country in the world. We are all individuals, we all lead our lives in different ways, we choose different partners, different career paths, choose to have children or not have children, become religious, choose not to be religious. So, when it comes to the point where we do not have any choice, when we can no longer have control over our lives due to the debilitating nature of a terminal illness or an incurable illness, when quality of life disappears and we are left with pain and suffering and a loss of quality of life, then we deserve to have the right to request for assistance to end that pain and suffering.

I share with you the story of my Mom and what happens when the country in which you live does not have legislation and what happens when you find yourself in a Catholic hospital where the hospital’s policies and procedures, based on religious faith, override your basic human rights, deny you the opportunity to end suffering and leave your loved ones and their families, forever traumatised by the circumstances of their suffering and their deaths.

Before my Mom became ill, I worked as a volunteer with VON (Victorian Order of Nurses) for ten years, visiting clients with terminal illnesses, clients who had had surgeries, were at the end of life, receiving Palliative Care, and whose families also needed bereavement support. Many of my “assignments” would last from three weeks to a year. VON relied on Volunteers to help visit clients, providing some relief for the families/carers for a few hours. I felt honoured to give back to the community in this way and it was extremely rewarding. It was during this time that I became an advocate for Medical Assistance In Dying, supporting the rights of individuals to request medical assistance when at the end stage of life and suffering from illnesses which robbed individuals of their quality of life and meant untold suffering. Many of the clients I supported through my work would beg for their life to end because of their pain and suffering. Families were left traumatised, exhausted and many became ill themselves after the responsibility of caring for their loved ones and after their loved ones had died.

My Mom was Genevieve. She was diagnosed with basal cell carcinoma in her shoulder. In May 2015 She became very ill with a blood infection that went throughout her body and she was put on an aggressive treatment of antibiotics for seven weeks. She hadn’t wanted to go to hospital when she became sick and I had insisted that she must go. I now wish I had not have taken her. She would have died a much more peaceful death than she did.

She was told at the hospital (a Catholic Hospital) that there was no guarantee that she would survive the treatment and life expectancy was given as anywhere between 6 hours, 6 days, 6 weeks, 6 months or 6 years.

She ended up surviving 15 weeks and 6 days (103 days) and I will never know how she managed to last that long with all that she had to endure.

Whilst she was in hospital she had many doctors who saw her, who were trying to decide how they could “cure” her – their words, not mine. She was in a Catholic hospital at this time.

During the many tests she was to go through, they also discovered an aggressive cancerous tumour in her back that was growing rapidly.

Medical Assistance In Dying, (MAID) in my country Canada, was not in place at that time – in 2015. Even had it been legalised, because her death, according to the doctors in the catholic hospital, was deemed to be “not foreseeable”, and they believed the tumour could be removed, she would not have met the criteria.

The doctors in the Catholic hospital decided they wanted to give Mom aggressive chemotherapy and radiation treatment. They wanted to operate and remove her right shoulder and arm. This would have meant she would lose half of her torso and her arm. They were also planning to cut the skin off her buttocks to perform a skin graft where her missing shoulder and arm would have been – and with no guarantees that she would actually survive the surgery and treatments.

Mom said she would agree to the aggressive procedures on one condition – that they would actually euthanise her during the surgery – as she did not want to wake up and have to deal and live without her right shoulder and arm. Of course, the doctors refused this request and my Mom refused to go through with the aggressive chemotherapy, radiation treatment and the surgery.

Whilst Mom was in hospital she actually had a heart attack. The doctors wanted to insert a wire into her artery and carry out heart surgery and Mom refused. Imagine what my Mom’s quality of life would have been like for her, had she agreed to have:

1. Right shoulder and arm sawed off and left with half a torso

2. Skin-grafts from her buttocks and the pain involved in that process

3. Whilst dealing with all of her pain, a wire inserted into her arteries

4. A large cut through her chest

What would her quality of life have been?

The cancerous mass found in her spine was horrendous. She was in so much pain. She was given pain medication. Unfortunately, the pain relief was not enough and she would have to wait until the next “scheduled” dosage.

She would ask, “Why are you refusing to give me more pain medication?” The doctor’s response was, “We don’t want you to become addicted to the drugs and if we give you more before the time is up it would kill you”. She responded, “I am dying anyway so what difference does it make? Is it better for me to suffer till I take my last breath?”

The doctor’s response, “It’s against the law, I could lose my job” and walked away. This was in a Catholic hospital – they are supposed to be compassionate and caring. The doctors refused to give my Mom more pain relief as she already had the “allowed” legal dosage for the pain she was experiencing.

There was an occasion where I spoke to the doctor – he knew Mom was in extreme pain. His hands were tied too, because of the “Catholic” policy. He had to get authorization to increase Mom’s medication to relieve her pain, but, unfortunately, she was not able to have any further pain relief because she had what they deemed to be the “legal” amount. Due to it being the weekend, Mom had to wait until the Monday for approval to have the medication increased past the legal amount, but she actually died waiting for it.

When the doctors told my Mom there was nothing more they could do for her, she laid in a hospital bed in pain and suffered for 90 days under “OHIP” coverage. That was the maximum time she was allowed to stay at the hospital before she had to start to pay herself.

Whilst Mom was waiting to die at the hospital, she was placed on a waiting list for a Nursing Home in Toronto and she had to wait for 200 people to die, for a bed. Instead she died waiting for that bed.

My Mom was transferred to a Transitional bed low income, at 1st Place Assisted Living, for three days. Mom suffered another heart attack and ended up going to Hamilton General – a 2nd hospital – within 15 minutes of arriving there, she was placed in palliative care for four days. The Palliative Care doctors asked Mom what she wanted and what her plans were.

It was arranged for Mom to be transferred to a 3rd hospital, St. Michael’s in Toronto, and that is where she died 5 days later.

I spent 103 days in hospitals watching my Mom suffer, as she begged to be euthanised. Do you know how that feels? It was very hard to have to watch her be in pain.

Her last words were “Pain – Pain” and again she was refused pain medication because she had reached the “legal dosage” that the doctor could give. 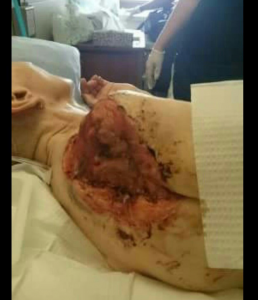 When she took her last breath, her eyes bugged out and she cried out in pain. Her back ripped open to her spine, from the cancerous mass in her back. This is the image that never leaves my mind.

Instead of dying peacefully in her sleep, free from pain, she died in agony. Mom was seventy-eight – she had hoped Assisted Dying would become legal. She died waiting for it.

The Decision Makers need to understand how end of life actually is for many. How would they want to die? Would they like to starve to death, with organs starting to shut down, when the stomach stops digesting? How about suffocation? Lungs shutting down.

That was the last five days of my Mom’s life, she couldn’t eat or drink anymore and had difficulty breathing. I was told, “Only God can take her”.

So my poor Mom, in agony, suffering, was forced to wait for the Decision Maker’s “God” to kill her. She suffered to the bitter end and she died her worst nightmare.

I continue to remain traumatised by my Mom’s suffering and death – 4 years on.

In 2018 I brought my Mom’s story to the attention of another doctor. Medical Assistance In Dying was, of course, legalised at this point. The doctor replied:
“Ms McCool,
I read your Email several times and am perplexed how a Canadian physician in the twenty first century could possibly believe there is a maximum allowable narcotic dose for intractable cancer pain. There is no such thing. The dose that makes the pain go away is the appropriate dose. Anyone trained in the Canadian medical system knows this and I’m so sorry your doctor(s) failed you and your mother during this critical time of need.
You don’t mention if she was specifically turned down by the MAID program but where I have participated, she should have qualified. Now, to be fair, I haven’t read any medical consults on her diagnosis nor the prognosis or treatment options offered by the specialists. From your letter it certainly looks like the explanations given to you and your mother were inadequate. As a family physician of 26 years I feel that we as a profession have let you down. My opinion of the MAID program is that this is exactly what we are trying to prevent, bad deaths. I hope this has been a little helpful.
Sid Harrison MD CCFP FCFP”

I cannot emphasise enough how much legislation is needed to assist those who find themselves in the same situation as those I cared for, as a volunteer, and my own mother whose suffering is never far from my mind.